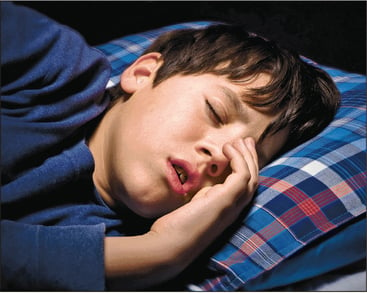 We all know someone who snores; yet, it is less common to know a child who snores. For 3 and ½ year old, Barrett Treadway, snoring is caused by sleep apnea. While this condition is most often diagnosed in overweight adults, it remains possible for children to suffer from obstructive sleep apnea. According to experts, between 1 and 3 percent of children have this condition.

Sleep apnea, if untreated, can impair normal development. A child’s memory, cognitive development, ability to learn efficiently, I.Q., and more can be affected. Treatment for this condition has proven to be effective, but there are still some long-lasting impacts. Dr. David Gozal warns, “The presence of snoring should not be viewed as a normal feature of sleeping children.” For those of you whose children snore, be aware that snoring can be associated with risks, and it can be properly treated.

Barrett Treadway, now 3½, has never been the best of sleepers, but her sleep grew increasingly worse in the last year and a half. She gets up several times a night, often climbs into her parents’ bed and creates havoc with their nights.

“We’ve known for a long time that she snores, but until a mother-daughter trip in May when we shared a bed, I didn’t realize that this was not simply snoring,” her mother, Laura, told me. “She repeatedly stopped breathing, then started again with a loud snort that often woke her up and kept me up all night.”

Barrett has sleep apnea, a condition most often diagnosed in adults and usually associated with obesity. But neither of those attributes describes Barrett, who is young and lithe, although the condition is somewhat more common in overweight children.

In most cases, the problem results when, during sleep, the child’s airway is temporarily obstructed by enlarged tonsils or adenoids or both — lymphoid tissues in the back of the throat — hence the name obstructive sleep apnea. When breathing stops for 10 or more seconds, the rising blood level of carbon dioxide prompts the brain to take over and restart breathing, typically accompanied by a loud snore or snort.

Rarely, a child may have what is called central sleep apnea, in which the brain temporarily fails to signal the muscles that control breathing.

Experts say that between 1 percent and 3 percent of children have sleep apnea that, if untreated, can disrupt far more than a family’s restful nights. Affected children simply do not get enough restorative sleep to assure normal development.

If not corrected, the condition can result in hyperactivity and attention problems in school that are often mistaken for attention deficit hyperactivity disorder (A.D.H.D.) and sometimes mistreated with a stimulant that only makes matters worse.

Affected children can be excessively sleepy during the day. Barrett’s preschool teachers have said she is hard to awaken from her nap. A child’s memory, cognitive development, ability to learn and I.Q. can suffer as well. Daytime irritability is not uncommon. Barrett’s parents report that her low tolerance for frustration when she can’t get her way has worsened in recent months.

However, once the condition is effectively treated, the child’s behavior can improve drastically, and most young children are able catch up on developmental milestones that might have been delayed.

Nonetheless, there can be subtle long-lasting effects, Dr. David Gozal, then at the University of Rochester, and colleagues reported in 2008 in Seminars in Pediatric Neurology. The research found that “children who snored frequently and loudly during early childhood were at increased risk for lower academic performance later in life, well after snoring had resolved.”

Dr. Gozal, a pediatric sleep specialist now at the University of Chicago Medical Center, warned that “the presence of snoring should not be viewed as a normal feature of sleeping children, since it indicates the presence of increased upper airway resistance.”

In 2008, he reported that 1 percent to 9 percent of infants and toddlers and 3 percent to 5 percent of children aged 9 to 14 habitually snore. Even if a snoring child’s sleep is not disrupted, he explained, “snoring is, in fact, associated with a higher risk for neurobehavioral deficits.”

For example, multiple studies have found that hyperactivity and inattentive behavior often affect children who snore habitually, as well as those with obstructive sleep apnea, but behavioral problems improve following surgery to remove the obstructing tissue.

In more severe cases of obstructive sleep apnea, with its breathing pauses and disrupted sleep, Dr. Gozal wrote, the combination of fragmented sleep and a diminished supply of oxygen can result in hard-to-reverse injury to “multiple target organs and systems” if the problem is left untreated or treatment is unduly delayed.

Adenoids and tonsils typically enlarge from infancy through childhood, then shrink during adolescence and adulthood. If during early childhood these tissues grow faster than the bones of the nose and throat, they can reduce the size of a child’s upper airway, making it difficult for the child to breathe when asleep.

Both genetics and ethnicity play a role in a child’s risk of developing obstructive sleep apnea. The combination of genes that determine facial structure and the thickness of oral tissues play a role, and the condition is more common among blacks than whites, even when body weight is taken into account.

In an interview, Dr. Gozal said a proper diagnosis should always precede surgery. He suggested that pediatricians routinely ask parents six questions at every well-child visit:

■ Does your child stop breathing during sleep?

■ Does your child struggle to breathe while asleep?

■ Do you ever shake your child to make him or her breathe again when asleep?

■ How often does your child snore?

■ Do you have any concerns about your child’s breathing while asleep?

■ How loudly does your child snore?

If sleep apnea is suspected, Dr. Gozal said, the next step should be a sleep study to confirm or rule out the diagnosis before considering surgery. “A clinical assessment and physical exam by the pediatrician or an ear, nose and throat specialist is insufficient to make a diagnosis,” he said.

While surgery to remove overly enlarged tonsils and adenoids is most often used to correct sleep apnea in children, milder cases may respond to the use of a steroidal nasal spray and oral anti-inflammatory medication, Dr. Gozal and colleagues have reported.

Even when properly treated, obese children may still have the problem and, without significant weight loss, may need to use a mask attached to a positive airway pressure (PAP) machine to help keep their airways open during sleep.

Although children may have difficulty adjusting to the bulky mask, it can significantly improve their behavior and quality of life, even if used just three hours a night, Carole L. Marcus, a professor of pediatrics at the Children’s Hospital of Philadelphia, and her colleagues reported in 2012 in The American Journal of Respiratory and Critical Care Medicine.