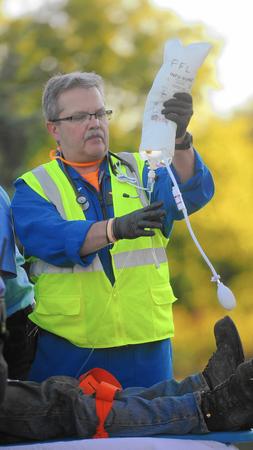 You may not be aware of it, but you inspire people every day. As a Nurse, you are challenged every day and you make a difference in the people’s lives you touch at work. Having just been in the Emergency Room yesterday myself, I was so touched by the small kindnesses shown by the Nurse taking care of me. When I was shivering with fever, she brought me a warm blanket. When she asked me on a scale of 1 to 10 the pain I was experiencing and I said 10, she gently encouraged me to take the pain medicine I was rejecting. I’m glad I followed her advice as it made a big difference. She was so kind and genuinely cared, like you do in your job.
This story very clearly demonstrates the impact your kind gestures have on your patients. I hope you feel the gratitude in this story and know you inspire people in your kind gestures and caring words.

On the hot Saturday night of Labor Day weekend in 2002, Jon Hagen was working his regular evening shift as a flight nurse on a medical helicopter in Wisconsin when a call came through about a rollover accident on a rural highway. Hagen and his partner rushed to the scene and airlifted a critically injured man to the nearest trauma center.

The patient, who looked about the same age as Hagen, died minutes after arriving at the emergency room. But something about the case haunted Hagen, a married father of two.

"For some reason, this one stuck," Hagen said. "Here's a guy that's I don't know how far from home, traveling alone ... You think about that and you wonder if they had family, kids, what they were doing."

Hagen Googled the patient's name a few days later. When he found an online obituary for Tom Procek, a 42-year-old married father of three from Woodridge, he took a few minutes to send the Proceks an online message to let them know their loved one didn't die alone.

Hagen didn't know it at the time, but that small gesture offered Procek's family comfort for years to come. And more than a decade later, Procek's only daughter, Kelly, returned the favor last spring when she Googled Hagen's name and sent him a touching message on Facebook.

"I wanted you to know that you and the work that you do inspired me to go back to school for nursing ...Throughout my school when we are asked why we wanted to go into nursing, I go back to the letter that you wrote our family about being by my Dad's side in his final moments. It meant the world to me that he wasn't alone. My Dad and I were very close and it still upsets me that we never were given the chance to say goodbye but thankful that he was with the people that were trying their hardest to save him. It inspired me to be that person for someone else."

Since Procek, 32, sent the message in March, she and Hagen, 57, have gone on to forge an unlikely friendship. The man who cared for her father in his final moments now serves as her nursing mentor. Hagen, who still works full time as a flight nurse in Wisconsin, and his wife drove to Downers Grove in May for Procek's graduation ceremony from the nursing program at College of DuPage, when he pinned her uniform — a long-standing tradition for nursing graduates. He cheered her on from a distance as Procek studied for her nursing certification exam, offering her tips and encouragement.

And when Procek begins work as a full-time pediatric nurse at MacNeal Hospital in Berwyn this month, Hagen will be anxiously awaiting stories from her budding career.

It's a bond that nurses seldom get to experience, despite the number of people they affect on a daily basis, said Mary Jo Assi, director of nursing practice at the American Nurses Association. Nurses may come in contact with hundreds of patients and their families each year, but they are trained to not expect much back in return.

"Typically, I think that nurses understand that when they are caring for people who are ill, people are not at their best," said Assi, who added that Hagen and Procek's story was an important reminder: "Those interactions have ripples ... it just absolutely warms my heart."

We couldn't be there, but to hear from somebody who was there, somebody who cared, provided me with a tiny bit of closure.— Kelly Procek, who was inspired to be a nurse by the flight nurse who tried to save her father

As a high schooler growing up in Wisconsin, Jon Hagen was inspired to become a paramedic by the 1970s show "Emergency!" Hagen received his emergency medical technician certification in 1976 at the age of 17. He took a job in an ambulance, fulfilling 24-hour shifts — one day on, two days off — treating people in dire need. Hagen loved the exhilaration of helping people while under pressure.

But after 14 years on the job, Hagen sought better pay and more job opportunities. He went back to school at Fox Valley Technical College in Appleton, Wis., for an associate's degree in nursing, followed by a bachelor's in nursing from the University of Wisconsin-Green Bay. He worked for four years as a registered nurse at a hospital intensive care unit, then took a job as a flight nurse in 1994.

Such was the case on Aug. 31, 2002, when Hagen and his work partner, Pam Witt-Hillen, then flight nurses for ThedaStar Air Medical in northern Wisconsin, were dispatched to an accident on Interstate 39 in the town of Dewey, a rural community in central Wisconsin. By the time Hagen and Witt-Hillen arrived, the victim was being treated by local paramedics, who were administering CPR. The emergency response team got back a pulse and loaded the man onto the helicopter stretcher to be rushed to a hospital in Marshfield, Wis., 50 miles away.

Through years of experience, Hagen knew the downside of his job: being unable to save patients.

"The way I look at it is you do the best you can and let the chips fall where they may," he said. "You rely on your training to do the right interventions and give them a chance."

On the helicopter flight to the hospital, Procek was unconscious. His heart stopped beating, but Hagen and his partner were able to get a pulse back doing CPR. They were still performing CPR when the flight landed and turned him over to emergency room staff. Minutes later, Procek was pronounced dead at the hospital, Hagen said.

Days later, Hagen couldn't stop thinking about the case. He Googled Procek's name from a work computer, something he did from time to time after losing patients on the job. When he saw the description of Procek as a father and husband, Hagen then did something he had never done before: He signed the online guest book at the funeral home.

"I think it was just real brief ... just something acknowledging their pain, and that we were with him," Hagen recalled of the message he posted. "I think people want to know, no matter how bad it is, that he mattered to somebody, he didn't die alone. That we tried."

Kelly Procek, the spirited, rebellious eldest child of Tom Procek, had always enjoyed a close relationship with her father.

Her dad, a machinist, gave her nicknames like "Smelly Kelly" and purposely swerved when he drove his daughter to dance team practice, trying to mess up the makeup she applied in the car. When he grounded her, he took the tires off her car and left it on cinder blocks in the driveway to ensure she didn't sneak away, she recalled with a laugh.

The weekend before the accident, Tom Procek moved Kelly into her new apartment in Bloomington, Ill., where she was enrolled in classes at Heartland Community College. Kelly returned home for Labor Day seven days later, and was out with friends on the night of Aug. 31 when a police officer called her cellphone to tell her that her father had been in a serious accident. They tracked down her mother, who was spending the long weekend elsewhere in Wisconsin with Kelly's youngest brother.

After several confused phone calls, the family learned that Tom Procek had died.

It was devastating news for the family, who were left with many unanswered questions: Where was he heading? What caused the single-car accident? Did he suffer or feel alone?

As the family scrambled to plan funeral services, the message from Hagen was so appreciated.

"We couldn't be there, but to hear from somebody who was there, somebody who cared, provided me with a tiny bit of closure," Kelly Procek said.

Inspired to help others

In the years after her father died, Kelly Procek struggled to find direction in her life. She graduated with her associate's degree, then moved to California with her boyfriend, Josh, for a fresh start. The couple had two children, and Procek worked for a cousin's event-planning business. But after three years on the West Coast, Procek wanted her children to be around family. She also decided it was time to get onto a career track.

When considering what she wanted to do, Procek remembered Hagen and the solace he offered her family when they needed it most. She also recalled the positive experiences she had with the hospital nurses who helped deliver her children.

Before moving back to the Midwest, she contacted the College of DuPage and inquired about what it would take to earn a degree in nursing. She moved back in 2012 and, for the next four years, spent hours at a time at the Glen Ellyn campus attending classes, or at local coffeehouses studying. Josh, a bartender, watched the children during the day. At night, after a long day of studies, she'd rush home to make dinner, give the children baths and put them to bed.

Procek excelled in her classes, earning the distinction of high honors, and became co-president of the college's Student Nurse Association. As her graduation day neared, she felt it was time to give credit to the man who inspired her path. She sent the message to Hagen on Facebook.

"It touched my heart," Hagen said. "That's kind of why you do what you do."

Within the first few exchanges, Hagen agreed to pin Procek at her graduation ceremony in May. Before a crowd of hundreds, Procek, who was chosen as the ceremony's graduation speaker, told the story of her friendship with Hagen.

"No matter where we go in our careers, always remember that our job won't always go smooth or be enjoyable. It won't always be clean or stress-free. But it will always have purpose," Procek told her fellow graduates. "Be that person for someone. Go that extra step."

Since then, the new nurse and her mentor have been in regular contact. Hagen sent her texts wishing her good luck before the nursing exam, then a card in the mail when she passed. She reached out to him excitedly when she landed her first job.

Procek, who hopes someday to transition into emergency room nursing, said she wants to follow her mentor's footsteps in more ways than one.

"I think that ultimately he's an inspiration of an amazing nurse," she said. "Just going into it, I hope I can somehow pay that forward."