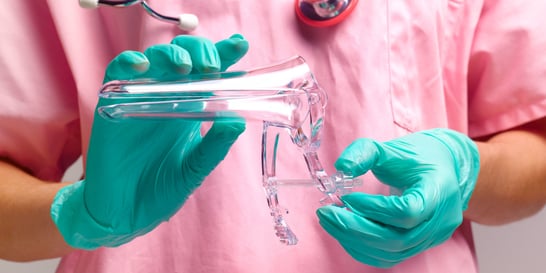 The risk of dying from cervical cancer might be much higher than experts previously thought, and women are encouraged to continue recommended cancer screenings.

Black women are dying from cervical cancer at a rate 77% higher than previously thought and white women are dying at a rate 47% higher, according to a new study that published in the journal Cancer on Monday.
The study found that previous estimates of cervical cancer death rates didn't account for women who had their cervixes removed in hysterectomy procedures, which eliminates the risk of developing the cancer.
"Prior calculations did not account for hysterectomy because the same general method is used across all cancer statistics," said Anne Rositch, assistant professor of epidemiology at Johns Hopkins Bloomberg School of Public Health in Baltimore and lead author of the study.
That method is to measure cancer's impact across a total population without accounting for factors outside of gender, she said.
There were about 12,990 new cases of cervical cancer in the United States last year and 4,120 cervical cancer deaths, according to the National Cancer Institute.

'A better understanding of the magnitude'

For the study, researchers analyzed data on cervical cancer deaths in the United States, from 2000 to 2012, from the National Center for Health Statistics and the National Cancer Institute's Surveillance, Epidemiology, and End Results databases.
The data were limited to only 12 states in the country, but the researchers noted that the data still provided a nationally representative sample of women.
Then, the researchers collected data from the Behavioral Risk Factor Surveillance System on how many women in 2000 to 2012, 20 and older, reported ever having a hysterectomy. They used that data to adjust the cervical cancer deaths rates.
Before the adjustment, the data showed that the cervical cancer killed about 5.7 out of 100,000 black women and 3.2 per 100,000 white women. After adjusting for hysterectomies, the rate was 10.1 per 100,000 black women and 4.7 per 100,000 white women.
The data showed that the racial disparity seen in cervical cancer death rates for black and white women was underestimated by 44% when hysterectomies were not taken into account.
"We can't tell from our study what might be contributing to the differences in cervical cancer mortality by age and race," Rositch said. "Now that we have a better understanding of the magnitude of the problem, we have to understand the reasons underlying the problem."
Cervical cancer is highly preventable in the United States because screening tests and a vaccine to prevent human papillomavirus, or HPV, which can cause cervical cancer, are both available, according to the Centers for Disease Control and Prevention.
"Racial disparity may be explained by lack of access or limited access to cervical cancer screening programs among black women, when compared to whites," said Dr. Marcela del Carmen, a gynecologic oncologist at the Massachusetts General Hospital Cancer Center, who was not involved in the new study.
"This gap and disparity need to be addressed with initiatives focusing on better access to prevention or screening programs, better access to HPV vaccination programs and improved access and adherence to standard of care treatment for cervical cancer," she said.
The new findings add to the current understanding of cervical cancer's impact on different communities, said Dr. John Farley, a practicing gynecologic oncologist and professor at Creighton University School of Medicine at St. Joseph's Hospital and Medical Center in Arizona.
"It lets us know that there is substantial work to do to investigate and alleviate the racial minority disparity in cervical cancer in the US," said Farley, who was not involved in the study, but co-authored an editorial about the new findings in the journal Cancer on Monday.
"Those who get cancer, many times, do not have access to screening," he said.
Even though cervical cancer mortality rates are higher than previously thought, Farley said that he thinks the current screening recommendations for cervical cancer are still adequate. However, he added, more women should have access to screenings and other preventive measures.
Rositch said, "It may be that some women are not obtaining screening according to our current guidelines, not necessarily that guideline-based care is insufficient."

How to prevent and screen for cervical cancer

The American Cancer Society recommends that women begin cervical cancer screenings at age 21 by having a pap test every three years. Then, beginning at 30, women should have a pap test combined with a HPV test every five years.
Symptoms of cervical cancer tend to not appear until the cancer has advanced, which is why screening and HPV vaccinations are urged.
"We have a vaccine which can eliminate cervical cancer, like polio, that is currently available and only 40% of girls age 13 to 17 have been vaccinated," Farley, co-author of the editorial, said. "This is an epic failure of our health care system in taking care of women in general, and minorities specifically."
Women over 65 might not need to continue screening if they don't have a history of cervical cancer or negative pap test results, according to the American Congress of Obstetricians and Gynecologists.
Each year, about 38,793 new cases of cancer are found in parts of the body where HPV is often found. The virus not only has been linked to cervical cancer, but also cancers of the vulva, vagina, penis, anus or throat.
A study that published in the journal JAMA Oncologylast week found that among a group of 1,868 men in the United States, about 45% had genital HPV infections and only about 10% had been vaccinated.
"Male HPV vaccination may have a greater effect on HPV transmission and cancer prevention in men and women than previously estimated," the researchers wrote in that study.