A Nurse And A Gentleman 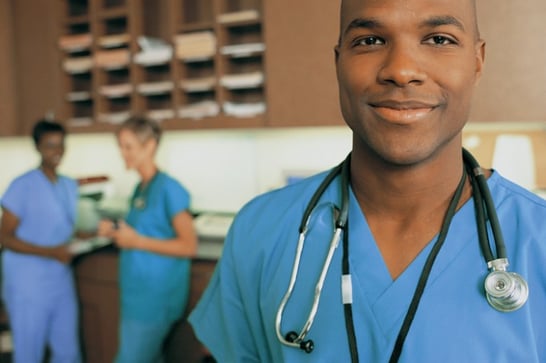 Educational systems should be increasing the diversity of its students to create a workforce that is prepared to meet the demands of diverse populations. Since the 70's there has been an increase of male Nurses by 200%. Stereotypes of professional gender rolls are being broken down.
The student-led group MEN, follows in the footsteps of AAMN the American Assembly for Men in Nursing. The group is open to all genders and their goals are to empower male Nursing students, promote awareness and cultural competence, and advocate growth and development. In doing so, MEN will help lead the change.

“It does not make a thing good, that it is remarkable that a woman should do it. Neither does it make a thing bad, which would have been good had a man done it ...”

The preceding quote is the second-to-last sentence of Nightingale’s famous book. Her allusion to the equality between sexes looks as if it has been added as an afterthought. In the discussion about men in nursing, her ideas may seem portentous, but it is doubtful if she ever imagined that men would be infiltrating the field.

The number of male nurses and men enrolling in nursing programs are at all-time high. According to the US Census Bureau in 2013, the latest figures show that approximately 9.6% of nurses in 2011 are male compared with 2.7% in the 1970s—representing a more than 200% increase. At our College, about 10% of advanced practice students and 14% undergraduate students were male during the school years 2014 to 2016. Eight of the full-time faculty are male—or 11%. Nationwide, enrollment of men in entry-level nursing programs remains stable at about 15% since 2012. It is likely that these numbers will increase in the next decade as more media attention is given to the reality of nursing as a viable and rewarding profession for men and women alike.

The student-led interest group MEN came about in 2009 when a group of male students sent out a call for anyone who identified as male to gather and brainstorm about establishing a student activity group.

In its by-laws, MEN adopted the objectives of the American Assembly for Men in Nursing (AAMN) as its core purpose. These goals include:

• To empower male nursing students to be responsible for their holistic health and well-being in order to serve as role models in the community.

Throughout each school year, MEN organizes and collaborates with other student groups to provide high quality extracurricular programming to not just meet its educational mission, but to promote comradery and mutual support among male students in the program. Some of the more recent events hosted by MEN include bike rides and indoor rock climbing, résumé writing and interviewing skills, men’s health awareness campaigns and fundraising, alumni networking, picnics, and presentations on various clinical topics of interest.

While the group’s purpose relates to men in the nursing profession, MEN is open to students of all genders, with some of its executive board members in the past being female. One significant outcome of the group is that several key MEN alumni established New York City Men in Nursing, an official chapter of AAMN.

While many health professions are becoming more gender-balanced, the nursing workforce has remained predominantly female. The impact of the increasing number of men entering nursing is still emerging and not yet fully understood. Other countries have long established policies to deal with instructional and practice variations based on religious restrictions. For example, in a nursing school in Oman, male students are not allowed in maternity wards. High-fidelity simulation offers male students the “hands-on” experience in labor and delivery.

One important consideration in the slowly increasing gender diversity in nursing education is for faculty to be aware of the well known gendered characteristics in learning, while keeping in mind that every individual is unique. Gendered differences is a potential topic for nursing education researchers.

Hospitals remain the largest employer of all registered nurses, with 63.2% providing inpatient and outpatient care in a hospital setting. Staff nurse—or its equivalent—is the most common job title of RNs in the US. However, there is no comprehensive data on current career choices of male nurses. Older data indicated more men work at hospitals in proportion to the number of female RNs.

What is certain today is that the highest representation by men in all fields of nursing practice is in nurse anesthesia. The US Census Bureau reported that 41% of all Certified Registered Nurses Anesthetist (CRNAs) are males. An online survey by Hodes Research in 2005 reported that the top three specialties reported by men were critical (27%), emergency (23%), and medical/surgical (20%). Awareness of the trend of career trajectories and aspirations of male nurses has important implications for nursing education and clinical stakeholders.

A Nurse and a Gentleman

Males are collectively called gentlemen, yet the virtue of gentleness, as a social construct, is mostly associated with women. Perhaps, it is one of the many reasons why it is especially pleasing to see men exemplify gentleness in a nursing role. What male nurses can offer to nursing is to breakdown the stereotypes of professional gender roles. Compassion, courage, good faith, and other virtues are all universal, and can be found among male and female nurses. At NYU Meyers, we believe in these values and are glad to see a growing number of men living them personally and professionally.