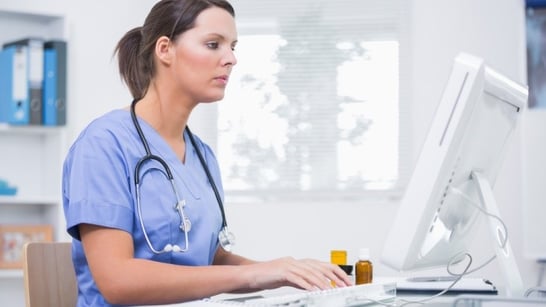 Technology is an integral part of almost every field of work and in order for Health systems to stay on the cutting edge you need a healthcare IT professional on staff. This is where the Nurse informatics specialist comes in.

Demand is growing for Nurse informaticists and according to the Healthcare Information and Management Systems Society, the average salary is more than $100,000 and 95 percent of their survey respondents “view health IT as a strategically critical tool to help healthcare organizations be successful.”

According to Forbes, "The shift to electronic health records has spurred a dramatic change in the way health care professionals work. Nurse informaticists design and maintain processes for how people use electronic records, finding ways to save nurses’ and caregivers’ time. And they test systems rigorously. For example, they must make sure a patient’s vital signs are accurately recorded by heart monitors, and that the data is accurately transferred to electronic health records." 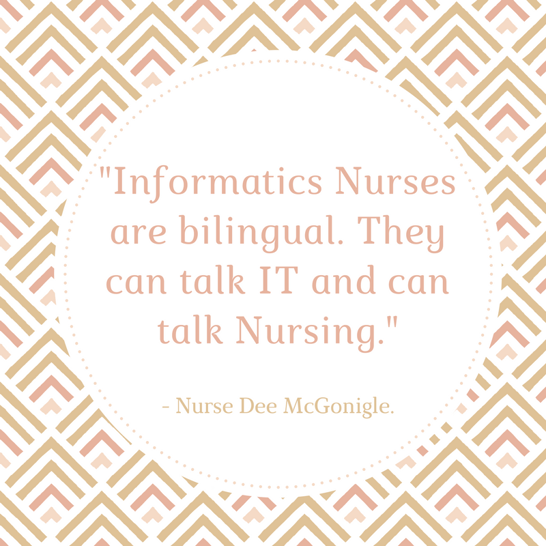 Informatics Nurse isn't a new career choice. Joyce Sensmeier, vice president of informatics at HIMSS says, "The American Nurses Association blessed it as a specialty in the early 1990s." She also goes on to say, “Usually the East and West Coast have quite a few positions. The Midwest as well — Minnesota, Wisconsin, and Illinois. That’s where a lot of the biggest health systems are. To be paying nurses this salary, it takes a strong health system.” But hospitals aren’t the only organizations that need the specialists. Universities and health technology startups do, too.

allnursingschools.com beleives it is a great leadership role opportunity. Because you’ll be responsible for creating strategies, implementing policies and ensuring better patient care, specialists can be a great fit for someone looking to move into advanced nursing. According to the HIMSS survey, 71 percent of healthcare organizations employ a “clinical IT leader” such as a Chief Nursing Informatics Officer.

Sensmeier also told Forbes, "To become a nurse informaticist, you’ll need a nursing degree, project management skills, an understanding of data and the ability to analyze it. The best route is to get a nursing bachelor’s degree to start, then get some real-world experience as a nurse, so you understand the clinical environment. After that, a master’s degree in health or nursing informatics — offered at most major universities—will provide all the education you need, even if you’d like to rise to the level of CNIO. These programs take two years, full time. An alternative is a one-year certificate in informatics. You probably can’t get to the CNIO level without a master’s, but a certificate will give you the core skill set."

The origin of Lou Gehrig's disease may have just been discovered

Amyotrophic lateral sclerosis - also known as Lou Gehrig's disease - is a condition that gradually attacks nerve cells that control our voluntary movement, leading to paralysis and death. In the US, a reported 30,000 individuals are living with the disease, but now, scientists have identified a fault in protein formation, which could be the origin of this condition.

The researchers, from the University of Wisconsin-Madison, have published their study on amyotrophic lateral sclerosis (ALS) in the journal Cell Stem Cell.

According to the Centers for Disease Control and Prevention (CDC), nobody knows for sure why ALS occurs, and there is currently no cure.

The researchers of this latest study, led by Su-Chun Zhang, senior author and neuroscientist at UW-Madison, say previously, a genetic mutation was discovered in a small group of patients with ALS, prompting scientists to transfer that gene to animals for drug treatment testing.

However, this approach has not yet worked. As such, Zhang and his team decided to study diseased human cells - called motor neurons - in lab dishes. These motor neurons are what direct muscles to contract, and Zhang explains this is where failures occur in ALS.

Zhang was the first scientist to ever grow motor neurons from human embryonic stem cells around 10 years ago, and he has recently been transforming skin cells into induced pluripotent stem (iPS) cells, which are then transformed into motor neurons.

He explains that the iPS cells can be used as models for disease since they have many of the same characteristics as their donor cells.

"With iPS, you can take a cell from any patient, and grow up motor neurons that have ALS," Zhang explains. "That offers a new way to look at the basic disease pathology."

For their latest study, the researchers have focused on proteins that erect a transport structure - called a neurofilament - inside the motor neurons.

They say the neurofilament moves chemicals and cellular parts - including neurotransmitters - to far sides of the nerve cell.

Zhang explains that the motor neurons, for example, that control foot muscles are around 3 ft long, so they need to be moved a whole yard from the cell body to the spot where they can signal the muscles.

As such, one of the first signs of ALS in a patient who lacks this connection is paralysis of the feet and legs.

'Findings have implications for other neurodegenerative disorders'

The team's recent discovery, however, has to do with the source of these tangles, which lies in a shortage of one of three proteins in the neurofilament.

Zhang explains that the neurofilament plays both a structural and a functional role:

"Like the studs, joists and rafters of a house, the neurofilament is the backbone of the cell, but it's constantly changing. These proteins need to be shipped from the cell body, where they are produced, to the most distant part, and then be shipped back for recycling.

If the proteins cannot form correctly and be transported easily, they form tangles that cause a cascade of problems."

He says their discovery is that the origin of ALS is "misregulation of one step in the production of the neurofilament."

Additionally, he notes that similar tangles crop up with Alzheimer's and Parkinson's diseases: "We got really excited at the idea that when you study ALS, you may be looking at the root of many neurodegenerative disorders."

Zhang and his team also observed that this misregulation happens very early, which is why it is highly likely that what they found is the origin ALS.

"Nobody knew this before, but we think if you can target this early step in pathology, you can potentially rescue the nerve cell," he says.

And as if this discovery is not exciting enough, the team also found a way to rescue the neural cells in the lab dishes, and when they "edited" the gene that orchestrates formation of the blundered protein, they found that the cells suddenly looked normal.

They report that they are currently testing a wide range of potential drugs, which brings hope to the domain of ALS research.

The CDC have a National ALS Registry, where patients with the condition can complete brief risk-factor surveys to help scientists defeat ALS.