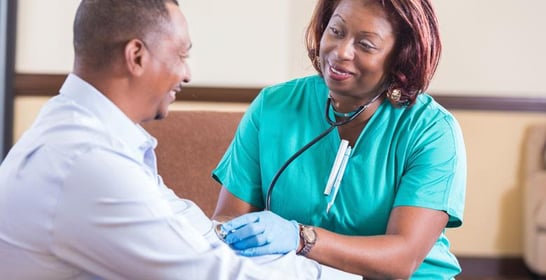 Depending upon your physical location of employment, whether it’s in the city, suburbs or rural area, you may encounter language barriers with your patients every day or maybe only once or twice a year. Whatever the frequency is for you, it’s important that the information you have to deliver is conveyed as clearly as possible. Some medical terms we use here in the US may not have clear translations in your patient’s native language.
What are you to do? This article will help guide you in these situations. Perhaps you’ve encountered a language barrier predicament that you’re willing to share with our Nursing community that would be helpful?

Let’s face it, it is often hard for a patient whose first language is English to navigate the technical medical vocabulary that we use in our healthcare system. Patients who don’t speak English well—or at all—are considered to have low health literacy. This is not necessarily a reflection of their intelligence, but rather of how hard it can be to educate them about their medical status, treatment plans, etc.

A language barrier can also make it hard for nurses to honor patient preferences, answer questions, and establish a trusting relationship—particularly when cultural differences exist regarding the patient’s concepts of wellness and illness. Perhaps most troubling is the fact that informed consent becomes a sticky issue, both legally and ethically, when a patient cannot understand his condition or ask questions about treatment options.

In regions with large Hispanic or Asian populations, many healthcare facilities have staff nurses who are bilingual. But what happens when you are caring for a patient that you can’t communicate easily with?

The ideal situation would be to use a professional translator who has training in medical vocabularies. These professionals are often available through a staffing service or a 24-hour telephone translation line. If you have access to these services, be sure to take advantage of them. And if you frequently encounter situations in which you feel a translator is required but none is available, you can encourage your hospital to contract with a translation service.

Often, friends or family members of the patient can step up to bridge the language gap. It’s advisable to use these ad hoc interpreters only as a last resort, because these non-professionals are more likely to make mistakes that can affect clinical outcomes. Friends or family members may have low health literacy themselves, may not fully understand a medical term that has no direct translation, or may inject their own personal views into the dialogue to the patient as an attempt to be helpful. The more complicated the medical case, the higher the likelihood of translation errors.

If you are communicating through a translator of any sort, there are a few things to keep in mind:

Census statistics indicate that nearly 47 million U.S. residents speak a foreign language at home, with a quarter of them reporting limited proficiency in English. These numbers practically ensure that you will encounter a language barrier at some point. Despite the difficulty in communicating, remember that you, as a nurse, are still responsible for providing a quality experience for the patient, including protecting his dignity, ensuring comfort, and advocating on his behalf. You also have to be diligent about assuring the data you document is as accurate.

Latinos are the largest ethnic minority group in the United States, and it's expected that by 2050 they will comprise almost 30 percent of the U.S. population. Yet they are also the most underserved by health care and health insurance providers. Latinos' low rates of insurance coverage and poor access to health care strongly suggest a need for better outreach by health care providers and an improvement in insurance coverage. Although the implementation of the Affordable Care Act of 2010 seems to have helped (approximately 25 percent of those eligible for coverage under the ACA are Latino), public health experts expect that, even with the ACA, Latinos will continue to have problems accessing high-quality health care.

Alex Ortega, a professor of public health at the UCLA Fielding School of Public Health, and colleagues conducted an extensive review of published scientific research on Latino health care. Their analysis, published in the March issue of the Annual Review of Public Health, identifies four problem areas related to health care delivery to Latinos under ACA: The consequences of not covering undocumented residents. The growth of the Latino population in states that are not participating in the ACA's Medicaid expansion program. The heavier demand on public and private health care systems serving newly insured Latinos. The need to increase the number of Latino physicians and non-physician health care providers to address language and cultural barriers.

"As the Latino population continues to grow, it should be a national health policy priority to improve their access to care and determine the best way to deliver high-quality care to this population at the local, state and national levels," Ortega said. "Resolving these four key issues would be an important first step."

Insurance for the undocumented

Whether and how to provide insurance for undocumented residents is, at best, a complicated decision, said Ortega, who is also the director of the UCLA Center for Population Health and Health Disparities.

For one thing, the ACA explicitly excludes the estimated 12 million undocumented people in the U.S. from benefiting from either the state insurance exchanges established by the ACA or the ACA's expansion of Medicaid. That rule could create a number of problems for local health care and public health systems.

For example, federal law dictates that anyone can receive treatment at emergency rooms regardless of their citizenship status, so the ACA's exclusion of undocumented immigrants has discouraged them from using primary care providers and instead driven them to visit emergency departments. This is more costly for users and taxpayers, and it results in higher premiums for those who are insured.

"That likely results in more visits to emergency departments when they are sicker, more complications and more deaths, and more costly care relative to insured patients," Ortega said.

Insuring the undocumented would help to minimize these problems and would also have a significant economic benefit.

"Given the relatively young age and healthy profiles of undocumented individuals, insuring them through the ACA and expanding Medicaid could help offset the anticipated high costs of managing other patients, especially those who have insurance but also have chronic health problems," Ortega said.

A number of states opted out of ACA Medicaid expansion after the 2012 Supreme Court ruling that made it voluntary for state governments. That trend has had a negative effect on Latinos in these states who would otherwise be eligible for Medicaid benefits, Ortega said.

As of March, 28 states including Washington, D.C., are expanding eligibility for Medicaid under the ACA, and six more are considering expansions. That leaves 16 states who are not participating, many of which have rapidly increasing Latino populations.

"It's estimated that if every state participated in the Medicaid expansion, nearly all uninsured Latinos would be covered except those barred by current law -- the undocumented and those who have been in the U.S. less than five years," Ortega said. "Without full expansion, existing health disparities among Latinos in these areas may worsen over time, and their health will deteriorate."

But Ortega said there is concern about their financial viability. As the ACA is implemented and more people become insured for the first time, local community clinics will be critical for delivering primary care to those who remain uninsured.

"These services may become increasingly politically tenuous as undocumented populations account for higher proportions of clinic users over time," he said. "So it remains unclear how these clinics will continue to provide care for them."

Language barriers also can affect the quality of care for people with limited English proficiency, creating a need for more Latino health care workers -- Ortega said the proportion of physicians who are Latino has not significantly changed since the 1980s.

The gap could make Latinos more vulnerable and potentially more expensive to treat than other racial and ethnic groups with better English language skills.

The UCLA study also found recent analyses of states that were among the first to implement their own insurance marketplaces suggesting that reducing the number of people who were uninsured reduced mortality and improved health status among the previously uninsured.

"That, of course, is the goal -- to see improvements in the overall health for everyone," Ortega said.