This Photo Of A New Mom And Her Nurse Goes Viral 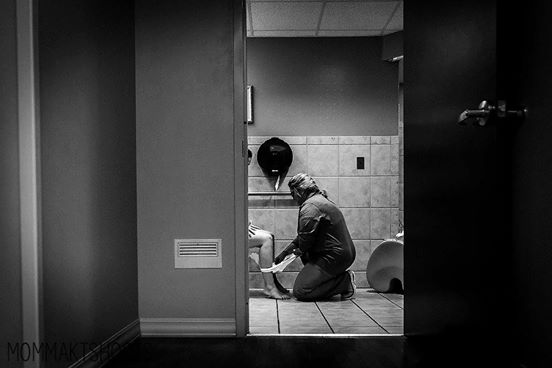 Appreciation – we love to feel appreciated for what we do, but often, it feels like our work sometimes goes unnoticed. Here’s a story we think you’ll enjoy. It’s all about appreciation and the work Nurses do. This is a big Thank You to Labor & Delivery Nurses, Midwives and Doula’s.

Mother of four, Jill Krause, recently saw a photo by Katie Lacer that moved her. She was overcome with memories and gratitude for the Nurses. Jill shared the photo with her thoughts about the labor, delivery, and postpartum Nurses who help new mothers in their most vulnerable moments. The post quickly went viral and mothers everywhere commented their experiences and shared their thanks to all the Nurses out there.  Below is Jill's post, check it out and leave your thoughts in the comment sections!

"I'll never forget the faces of the nurses who followed me into the bathroom after delivering each baby. That moment when I was so vulnerable, so tired, scared, shaky. My swollen belly deflating, and my modesty long gone. They treated me with such kindness and dignity. For me, these have been moments of empowerment and confirmation that I have a real village to help me, even if just for that little bit of time in a bathroom, on a toilet, while a kind nurse shows me how to put an ice pad on my mesh undies. This photo by my friend MommaKT Shoots just takes me right back. Like, I can smell the Dermaplast. Let's hear it for the nurses and the doulas and anyone else who shows us how to make ice pad underwear (or helps with that first shower post c-section!) <3"

Posts came pouring in from moms all over! Below are some of the posts that were shared.

"When I was pushing, I'll never forget pulling my face away from my nurse's chest to see her scrub top SOAKED with my sweat and tears. I was like, 'Oh my god I'm so sorry!' And she said, 'Baby, this is life all over my shirt. Nowhere else I'd rather be. Now let's get that baby out.'" —Leigh Kathleen, Facebook

Pictured: Joanie McConnell, CNM at the University of Louisville by Katie Lacer / Via mommaktshoots.com

"I will never forget the nurse that helped me get to the bathroom for the first time after I had my daughter. I was hemorrhaging and when I stood it was so humiliating...but that kind soul didn't flinch. I kept apologizing and she kept reassuring me that it was nothing. I will never forget watching her clean my legs and I just kept thinking that this is what my God means when he says love your neighbor." —Tiffany Barnes

"My husband and I lost our daughter at 23 weeks two years ago, and delivered our rainbow baby boy at the same hospital this May. All the nurses I had knew our history, and when my son was born he wasn't breathing. He was immediately taken away to the NICU and I just could not stop sobbing. My nurses cried with me. They rubbed my hair and my back and did everything they possibly could to get me mobile and up to see my sweet boy in the NICU." —Lauren Self, Facebook 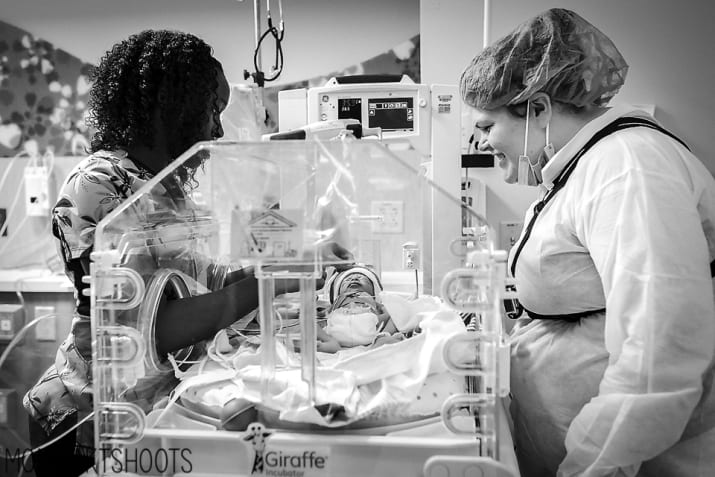 While studying to become a paralegal and working as a temp, Symphonie Dawson kept feeling sick. She found out it was because she was pregnant.

Living with her mom and two siblings near Dallas, Dawson, then 23, worried about what to expect during pregnancy and what giving birth would be like. She also didn't know how she would juggle having a baby with being in school.

At a prenatal visit she learned about a group that offers help for first-time mothers-to-be called the Nurse-Family Partnership. A registered nurse named Ashley Bradley began to visit Dawson at home every week to talk with her about her hopes and fears about pregnancy and parenthood.

Bradley helped Dawson sign up for the Women, Infants and Children Program, which provides nutritional assistance to low-income pregnant women and children. They talked about what to expect every month during pregnancy and watched videos about giving birth. After her son Andrew was born in December 2013, Bradley helped Dawson figure out how to manage her time so she wouldn't fall behind at school.

Dawson graduated with a bachelor's degree in early May. She's looking forward to spending time with Andrew and finding a paralegal job. She and Andrew's father recently became engaged.

"Ashley's always been such a great help," Dawson says. "Whenever I have a question like what he should be doing at this age, she has the answers."

Home-visiting programs that help low-income, first-time mothers have been around for decades. Lately, however, they're attracting new fans. They appeal to people of all political stripes because the good ones manage to help families improve their lives and reduce government spending at the same time.

In 2010, the Affordable Care Act created the Maternal, Infant and Early Childhood Home Visiting program and provided $1.5 billion in funding for evidence-based home visits. As a result, there are now 17 home visiting models approved by the Department of Health and Human Services, and Congress reauthorized the program in April with $800 million for the next two years.

The Nurse-Family Partnership that helped Dawson is one of the largest and best-studied programs. Decades of research into how families fare after participating in it have documented reductions in the use of social programs such as Medicaid and food stamps, reductions in child abuse and neglect, better pregnancy outcomes for mothers and better language development and academic performance by their children.

But others say the requirements for evidence-based programs are too lenient, and that only a handful of the approved models have as strong a track record as that of the Nurse-Family Partnership.

"If the evidence requirement stays as it is, almost any program will be able to qualify," says Jon Baron, vice president for of evidence-based policy at the Laura and John Arnold Foundation, which supports initiatives that encourage policymakers to make decisions based on data and other reliable evidence. "It threatens to derail the program."