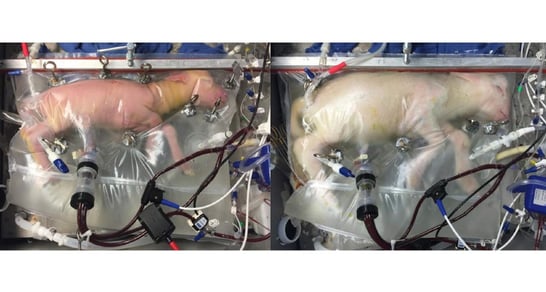 Have you heard the recent news story about an artificial womb to help babies born prematurely? Right now, scientists have created it and are testing it with animals. Lambs, the article states, are responding well.
This topic raises many ethical questions. Read this article for the details and let us know what you think. Is this a little out there, or, are you comfortable with the possibilities for the future?

Scientists have created an "artificial womb" in the hopes of someday using the device to save babies born extremely prematurely.

So far the device has only been tested on fetal lambs. A study published Tuesday involving eight animals found the device appears effective at enabling very premature fetuses to develop normally for about a month.

"We've been extremely successful in replacing the conditions in the womb in our lamb model," says Alan Flake, a fetal surgeon at Children's Hospital of Philadelphia who led the study published in the journal Nature Communications.

Flake says the group hopes to test the device on very premature human babies within three to five years.

"What we tried to do is develop a system that mimics the environment of the womb as closely as possible," Flake says. "It's basically an artificial womb."

Inside an artificial womb

The device consists of a clear plastic bag filled with synthetic amniotic fluid. A machine outside the bag is attached to the umbilical cord to function like a placenta, providing nutrition and oxygen to the blood and removing carbon dioxide.

Other researchers praised the advance, saying it could help thousands of babies born very prematurely each year, if tests in humans were to prove successful.

Jay Greenspan, a pediatrician at Thomas Jefferson University, called the device a "technological miracle" that marks "a huge step to try to do something that we've been trying to do for many years."

"I think this is a major breakthrough," Shaffer says.

The device in the fetal lamb experiment is kept in a dark, warm room where researchers can play the sounds of the mother's heart for the lamb fetus and monitor the fetus with ultrasounds.

"If you can just use this device as a bridge for the fetus then you can have a dramatic impact on the outcomes of extremely premature infants," Flake says. "This would be a huge deal."

But others say the device raises ethical issues, including many questions about whether it would ever be acceptable to test it on humans.

"There are all kinds of possibilities for stress and pain with not, at the beginning, a whole lot of likelihood for success," says Dena Davis, a bioethicist at Lehigh University.

Flake says ethical concerns need to be balanced against the risk of death and severe disabilities babies often suffer when they are born very prematurely. A normal pregnancy lasts about 40 weeks. A human device would be designed for those born 23 or 24 weeks into pregnancy.

Only about half of such babies survive and, of those that do, about 90 percent suffer severe complications, such as cerebral palsy, mental retardation, seizures, paralysis, blindness and deafness, Flake says.

About 30,000 babies are born earlier than 26 weeks into pregnancy each year in the United States, according to the researchers.

Davis worries that the device is not necessarily a good solution for human fetuses.

"If it's a difference between a baby dying rather peacefully and a baby dying under conditions of great stress and discomfort then, no, I don't think it's better," Davis says.

And even if it works, Davis also worries about whether this could blur the line between a fetus and a baby.

"Up to now, we've been either born or not born. This would be halfway born, or something like that. Think about that in terms of our abortion politics," she says.

Some worry that others could take this technology further. Other scientists are already keeping embryos alive in their labs longer then ever before, and trying to create human sperm, eggs and even embryo-like entities out of stem cells. One group recently created an artificial version of the female reproductive system in the lab.

"I could imagine a time, you know sort of [a] 'Brave New World,' where we're growing embryos from the beginning to the end outside of our bodies. It would be a very Gattaca-like world," says Davis, referring to the 1997 science-fiction film.

There's also a danger such devices might be used coercively. States could theoretically require women getting abortions to put their fetuses into artificial wombs, says Scott Gelfand, a bioethicist at Oklahoma State University.

Employers could also require female employees to use artificial wombs to avoid maternity leave, he says. Insurers could require use of the device to avoid costly complicated pregnancies and deliveries.

"The ethical implications are just so far-reaching," Gelfand says.

Barbara Katz Rothman, a sociologist at the City University of New York, says more should be done to prevent premature births. She worries about the technological transformation of pregnancy.

"The problem is a baby raised in a machine is denied a human connection," Rothman says. "I think that's a scary, tragic thing."

Flake says his team has no interest in trying to gestate a fetus any earlier than about 23 weeks into pregnancy.

"I want to make this very clear: We have no intention and we've never had any intention with this technology of extending the limits of viability further back," Flake says. "I think when you do that you open a whole new can of worms.

Flake doubts anything like that would ever be possible.

"That's a pipe dream at this point," Flake says. 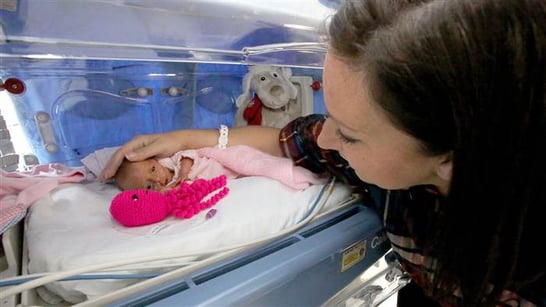 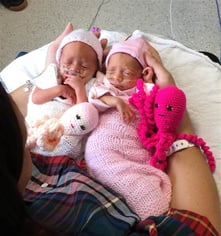