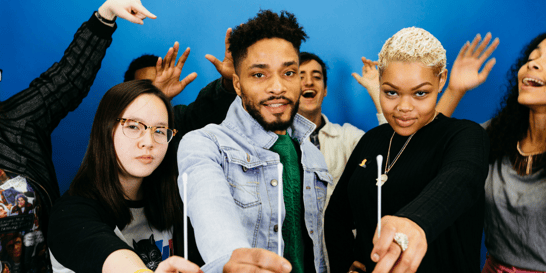 We’re posting this information about the “Give a Spit About Cancer” campaign to help spread awareness regarding healthcare disparities in bone marrow transplant recipients. As usual, white patients have a greater chance of finding a donor match than people of color. If more bone marrow donations are given by people of color, the % of matches in this population will increase. Please help us spread the word.

Give a Spit About Cancer was established to help address a staggering health disparity that exists among bone marrow transplant patients: 77 percent of white patients have a chance of finding a viable donor, while black patients only have a 23 percent chance. By increasing the diversity of donor registries and targeting donors between 18 and 44, the campaign aims to do what nurses strive for every day: give all patients an equal chance, regardless of race.

Throughout this year’s campaign, DoSomething.org and Johnson & Johnson will take to social media to spread awareness and mobilize the community to take action. However, the campaign is much more than a social media movement – it is truly saving lives. Young people can help make a tangible difference by simply swabbing their cheeks with the provided swab kits, which adds them to the partner organization Be The Match®, operated by the National Marrow Donor Program® (NMDP), the largest and most diverse marrow registry in the world.

For donors like 19-year-old Veronica, diversifying the bone marrow registry is essential to providing life-saving operations, like those that could have saved the life of her friend Demarco, who had bone marrow cancer and passed away after a transplant rejection.

“I want to help people like my friend because he deserved to live his life and go to college, but wasn't able to achieve his dreams,” Veronica shared with DoSomething.org. “I'd hate to see more young people suffer from cancer when they are more than able to make this world a better place like Demarco did. For his memory - this is why I want to donate, to change someone’s life."

The Give a Spit About Cancer campaign launched on March 27 – now is the time to get involved. Visit DoSomething.org to find out how you can get a swab kit, start a drive on your campus, encourage your peers, and get involved in the movement.

If not for a stranger halfway around the world, 8-year-old Grant Berg wouldn't be alive today, his mother said.

Grant needed a bone marrow transplant, but after an international search, it was an 18-year-old German college student who came to his rescue in 2011, Grant's mother, Kristi Berg told ABC News. And on Sunday night, Grant and his hero met for the first time at the Los Angeles International Airport.

"I've imagined it so often in my mind and now it is reality," Grant's bone marrow donor, Marvin Zumkley, 22, told KABC-TV, ABC's Los Angeles station. "It was crazy. It was overwhelming, and it was just a good feeling."

A year and a half before the transplant, Grant was diagnosed with aplastic anemia, a rare but serious condition in which the bone marrow stops producing new blood cells, Berg said. This includes red blood cells, which carry oxygen; white blood cells, which fight off infection; and platelets, which mend blood vessels and stop bleeding, according to Dr. Hillard Lazarus, who directs UH Case Medical Center's novel cell therapy program in Cleveland but has not met or treated Grant.

"You need to treat this thing," Lazarus said, adding that it's often unclear what causes aplastic anemia. But only about 600 to 900 people are diagnosed with it every year.

Berg said Grant was getting different kinds of transfusions every week for a year and a half before the transplant.

"For a year and a half, he lived off other people's blood," Berg said. "I can't even count the amount of transfusions he had."

And then Zumkley's bone marrow changed Grant's life, she said. “It means everything to me," she added.

Grant was also born with only part of his cerebellum, so he'll be tested later this year for genetic conditions, she said.

After staying up well past his bedtime to meet Zumkley, Grant fell asleep in the car on the ride home to Temecula, California, Berg said. The plan is for Zumkley to relax for a few days, visit Disneyland and find other ways to enjoy southern California and get to know Grant, she said.