The Growing Role Of the Chief Nursing Officer 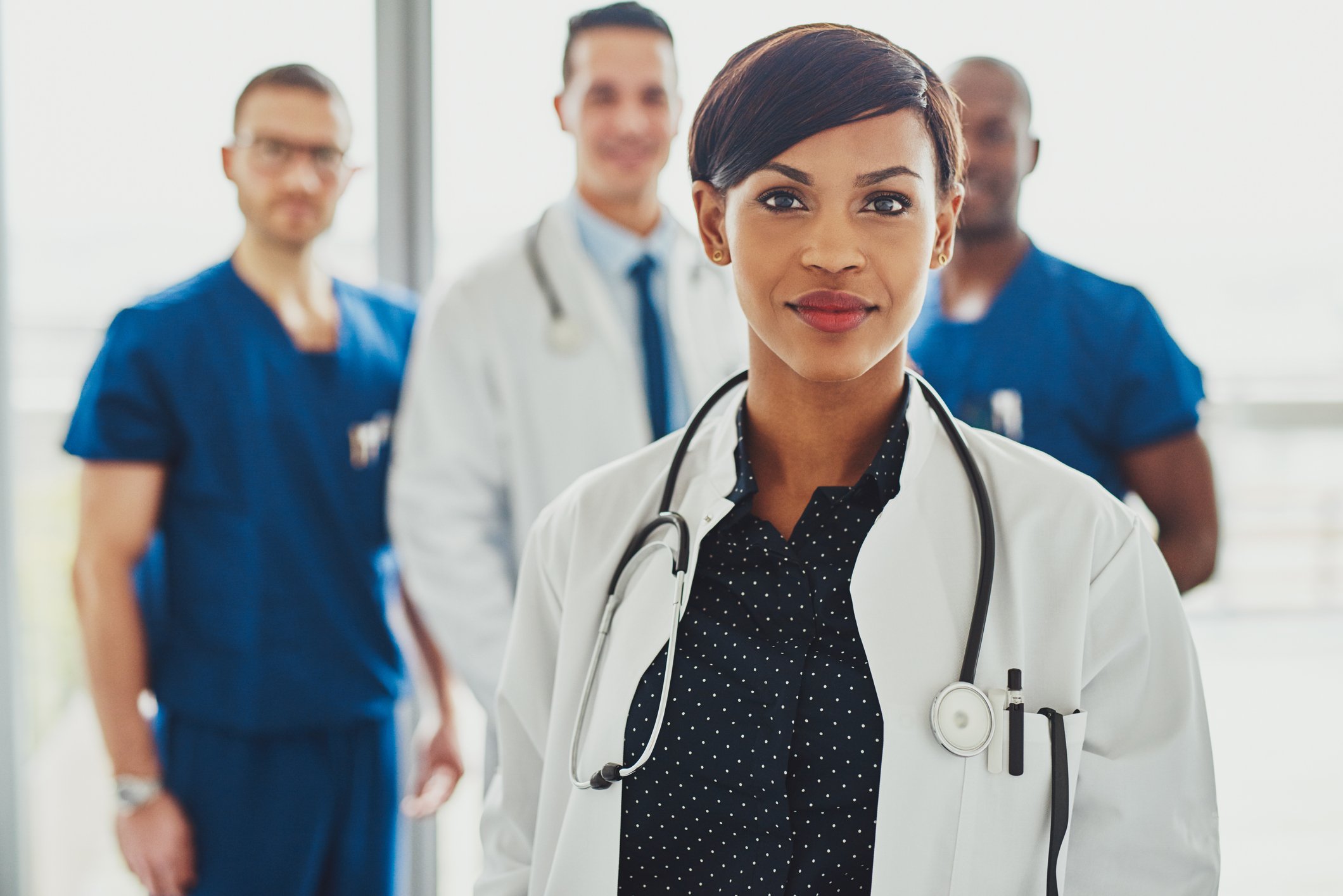 Chief Nursing Officers have a wide variety of responsibilities. Their role has become more complex with the COVID-19 pandemic, social injustices, and systemic racism in the United States.

The pandemic is straining the healthcare profession. Nurses are under immense stress and Nursing leaders need to use best practices to address the mental and emotional trauma their teams are enduring.

Some of those strategies include training staff to recognize the signs of being at high risk for emotional distress, and when peers should be referred to the Employee Assistance Program (EAP).

Also the hospital has contracted a trauma clinical Psychologist to talk with staff and run support groups with the EAP and the Ministries department.

CNO's should recommend frequent breaks or a quiet space for Nurses to retreat to.

According to a survey by Inspire Nurse Leaders, 53% of Nurse Leaders reported difficulty meeting work and family needs due to inadequate staffing.

When there is a surge in Covid-19 hospitalizations, it forces hospitals to increase their number of beds. According to Ruth Risley-Gray, SVP and CNO at Aspirus Health Care, in order to meet high demands as they emerge, health systems shift Nurses between departments and facilities.


Risley-Gray also said, health systems need to hire outside help when Nurses become infected or get exposed to the virus. Aspirus is offering Nurses who have at least one year's experience a $15,000 signing bonus, as well as employing contract Nurses via private staffing companies.

2020 not only brought forth a pandemic, it also put a spotlight on systemic racism and racial health disparities.

Sharon Hampton, PhD, RN and Director of Clinical Operations at Stanford Health said, "We've discussed our ethical and moral responsibilities to deal with this crisis. Nursing is really in this position to help the public understand and to advocate."

Healthcare systems and Nurse leaders should be promoting diversity and inclusion at all levels of the workplace.

Those in leadership positions should reflect the diverse patient populations they serve.

According to HealthLeaders Media, a study by the Institute for Diversity and Health Equity found that racial minorities represented 32% of patients in hospitals that participated in the study, but similar representation wasn't found among the health care leadership. According to the study, 19% of first- and mid-level management positions, 14% of hospital board membership positions, and 11% of executive leadership positions were held by racial minorities.

Have you heard the term “moral distress”? It might be something you deal with occasionally in your job. You might have to go along with a decision made by a patient’s family member or it could be a decision made at you place of employment that makes you uncomfortable. This is moral distress.
We deal with it in our personal  and professional lives. This article talks about moral distress for CNO’s. We hope it’s enlightening.
The concept of moral distress in nursing—the disequilibrium resulting from the recognition of and inability to react ethically to a situation—has been around since the 1980s, and it's been acknowledged that some bedside nurses experience it during challenging situations such as when there is a conflict surrounding end-of-life care.

But what about chief nursing officers? They aren't providing direct care at the bedside, but do they still experience moral distress?

The answer, according to a qualitative study published in the Journal of Nursing Administration in February, is yes. It's just taboo to talk about it.

"There's shame and isolation when you do have the experience, so it can make it very difficult for people to feel like they can openly discuss it," says Rose O. Sherman, EdD, RN, NEA-BC, FAAN, professor and director of the Nursing Leadership Institute at Florida Atlantic University.

Sherman is one of the study's authors. "I think that the other piece of it is, CNOs might not always label it as moral distress. But these are uncomfortable situations where they're making decisions against their values systems."

The study's 20 participants described their experiences of moral distress, and several said they experienced it on more than one occasion. It was often related to issues around staff salaries and compensation, financial constraints, hiring limits, increased nurse-to-patient ratios to drive productivity, counterproductive relationships, and authoritative improprieties.

"For example, a physician went to someone over a CNO's head and said, 'I think you should pay a scrub tech more. She is very valuable to me," Prestia says. "And of course he was a high-admitter, high-profile physician."

The CEO approved the special compensation, creating a salary inequity among the other scrub techs.

In another scenario, six participants reported their CEOs had improper sexual relationships with staff members. Prestia points out that the CNOs did not object to these relationships because of religious or moral beliefs, but because they were harming productivity at the organization.

"In their [the CNOs'] mind' of right and wrong, these people had access to things that they should not have had access to and [those relationships] create barriers to getting the work of the organization accomplished."

CNOs reported they often felt very isolated during the experience of moral distress.

"If they pushed back on a decision because they felt it was in conflict with their values they were isolated within the organization and they no longer felt safe. They weren't invited to meetings. They weren't included in decision making," Sherman says.

Even though they took steps to do what they felt was right—documenting meeting minutes, reviewing policies and procedures, and referring to The Joint Commission standards—to maintain their moral compass, those efforts were often unsuccessful.

"What happened was when they were in this situation… they were beat down at every turn," Prestia says. "Then the 'flight' started to set in. 'Maybe I need to leave? Maybe I should resign? Maybe I need to start planning my exit strategy?' Or before they could do that, they were terminated."

Moral Residue
Even once they were out of the situation, many CNOs reported the experience left them with a 'moral residue.'

"It is a lingering effect of the moral distress. I liken it to a fine talc that lingers on your skin and it manifests itself either physically or emotionally," Prestia says. "We actually had several participants say, 'When I get a call about staffing now in my new job, all of a sudden I get this feeling of impending doom.'''

Both Sherman and Prestia hope this research will open up a larger conversation about CNOs and moral distress. They will present their findings at the AONE 2017 conference in March.

"What we found in the work that we did was, clearly, collegial support from a strong network is very important in building one's resiliency and being able to deal with these situations," Sherman says.

"I think that having others who've been through it is very important, which is why forums that allow people to talk about this candidly, when a CNO finds him or herself in this situation, become critical."

What Makes A Good CNO? 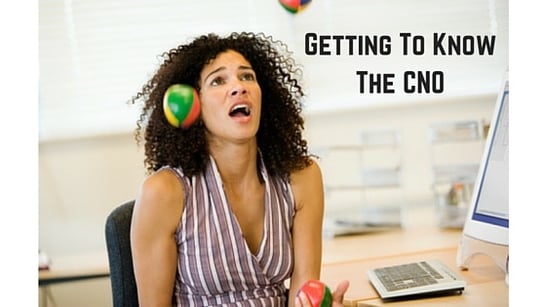 The healthcare industry is filled with challenging and rewarding job opportunities. For those who are actively pursuing a career in nursing and who eventually wish to acquire leadership roles in that field, striving for the occupation of Chief Nursing Officer is a worthwhile endeavor.  To be a successful CNO in the healthcare system there are specific requirements, qualities, and skill sets that the industry requires of their employees. These attributes can determine the likelihood of potential employment. Along the same vein, what does it really take to become a good CNO (Chief Nursing Officer) in the medical sector?"

The requirements for the role of CNO vary depending on the preferences of the employer.  There is, however, a general consensus that to be considered for the position of CNO, the applicant needs years of nursing experience and some form of a graduate degree. Some hospitals or medical affiliates require as little as 5 years of experience while others require applicants have 7 - 10 years of practice in the medical industry. The CNO position is the highest ranking Nurse in administration and that role is not taken lightly.

Taking the right educational journey to a specific career is important. The value and focus a Chief Nursing Officer hopeful applies to their education path speaks volumes to potential employers.  Having a MS Nursing (management and organizational leadership) degree, a MS in Nursing (leadership in health care systems) degree or a Master of Science in Nursing Administration is a common trend among current Chief Nursing Officers. Earning a combination of a science-oriented Nursing degree along with a business emphasis degree is encouraged when seeking a leadership position in healthcare.

If a healthcare employee is seeking admission into a Master's degree program to aid them in their journey toward career advancement, they have expectations to meet. Those in the Nursing field are required to have an active RN license, a Bachelor's degree, and should be aware that RN clinical experience bears heavily in the admissions process. While there are many technical aspects to attaining the title of CNO, becoming a "good" CNO goes beyond the basic requirements.

10 Qualities of a CNO

Skill Sets of a Good Leader

Chief Nursing Officers realize the importance of setting long and short term goals for the betterment of their facility. As a consummate problem-solver, the business-minded and client-conscious leader balances passion for patient welfare with administrative management. Implementing processes that ensure the business side of healthcare runs smoothly, the leadership role of a CNO is fraught with responsibility, but also with rewards.  They are the faculty informers, the interviewers, the proficiency job monitors for Nurses, staff schedulers, and that is just the start to their long list of duties.

Boasting of better pay, job security, and intrinsic rewards, there are many reasons why a CNO values their many-faceted position. Leaders are born through adversity, and a confident Chief Nursing Officer can handle with marked professionalism, the many conflicts that come their way.  A good CNO values people and the efficient processes that bring order to chaotic environments.

Any Chief Nursing Officers looking to grow diversity in their facility can click below for contact information. We would be more than happy to help you.