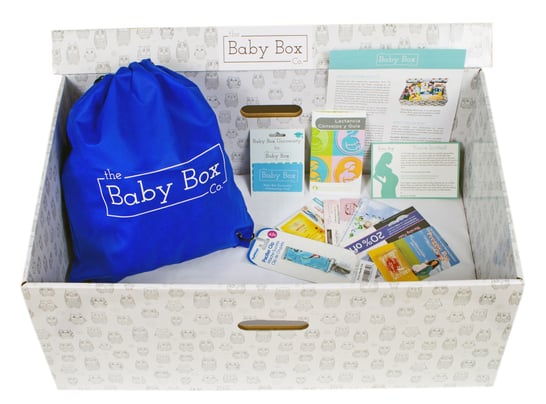 If you’re a parent, you know how daunting those first few months are, not to mention exhausting. Many of you work with new mothers in the maternity ward, doctor’s office, etc. Wouldn’t it be helpful to offer more education about SIDS and how to care for a newborn?

The Baby Box Co, Cooper University Hospital and several other facilities in NJ have teamed up to save infant lives in New Jersey. It's quite an interesting idea this baby box, and because it's educational, the hope is it will increase safety for newborns. Sounds like a wonderful and welcome idea for new mothers and fathers. We hope it will spread across the U.S. and reduce infant mortality.

New Jersey is the first state where all expecting and new parents can receive mattress-lined boxes and infant care supplies from The Baby Box Co. after completing an online parenting education program through its website, babyboxuniversity.com.

That country's work inspired Jennifer Clary and Michelle Vick to launch The Baby Box Co. in the United States. According to its website, Baby Boxes serve families in 52 countries.

"I think we have a very special product, but it's only special because of the way we distribute it," Clary, the CEO, said. "Early parenting education is linked to infant mortality reduction. That's what we focus on."

The New Jersey program expects to distribute about 105,000 boxes this year. In South Jersey, the boxes will be distributed by Cooper University Health Care and Southern New Jersey Perinatal Cooperative, among others. Parents also can choose to have the box delivered to their home.

Made from sturdy cardboard, the boxes can be used as a bed for the baby until 5 or 6 months of age. The supplies include diapers, wipes, a onesie, breastfeeding supplies and other items, valued at $150.

The program was introduced by New Jersey's Child Fatality & Near Fatality Review Board, using a grant from the Centers for Disease Control. The review board examines deaths and near-deaths of children to identify causes and ways to prevent future deaths.

"Unsafe sleep is a significant cause of SUIDS in our state and likely in every state," McCans said. "Based on national data, New Jersey fares pretty well, as far as the rate of SUIDS death, but our rate is still high enough that it results in 50 to 60 deaths a year that seem to have at least unsafe sleep associated with it, even if it wasn't the full cause."

Factors associated with safer sleep include a firm mattress and a bare crib with no blankets, pillows, bumpers or stuffed animals in it; no smoking or substance use during or after pregnancy or by anyone in the household; exclusive breastfeeding during the first six months of life or any amount of breastfeeding possible.

"This program, at its core, is about getting education out to parents in a form that younger parents really love," McCans said.

Two Camden families were the first to receive their boxes Thursday. Dolores Peterson popped her 5-week-old daughter into a cardboard box lined with a mattress, as cameras recorded little Ariabella Espada's reaction.

Peterson, a first-time mother, said she plans to tell her mothers group about the program.

"I'm going to let every mother know to sign up and get a box," Peterson said, so their babies can sleep safely, too.

To receive a free box, New Jersey parents can register for free online at babyboxuniversity.com. After watching a 10-15 minute program and taking a short quiz, parents can choose how to receive their box.

A brain abnormality may be responsible for more than 40 percent of deaths from sudden infant death syndrome (SIDS), a new study suggests.

The abnormality is in the hippocampus, a part of the brain that influences breathing, heart rate and body temperature. This abnormality may disrupt the brain's control of breathing and heart rate during sleep or during brief waking that happens during the night, the researchers report.

"This abnormality could put infants at risk for SIDS," said lead researcher Dr. Hannah Kinney, a professor of pathology at Harvard Medical School in Boston.

Before this brain abnormality can be called a cause of SIDS, Kinney said, they have to find out what causes this abnormality and determine if it alone can cause SIDS.

For the study, Kinney's team examined sections of the hippocampus from 153 infants who died suddenly and unexpectedly between 1991 and 2012. The deaths were classified as unexplained -- which includes SIDS -- or from a known cause, such as infection, accident, murder or lack of oxygen.

Kinney's group found that 41.2 percent of infants who died for an unexplained reason compared with 7.7 percent of those whose death was explainable had an abnormality in the part of the hippocampus known as the dentate gyrus.

Among the 86 infants whose death was classified as SIDS, 43 percent had this abnormality, the researchers added.

This change in the dentate gyrus suggests there was a problem in development at some point late in the life of the fetus or in the months after birth, Kinney said.

Kinney added that this abnormality has only been seen under the microscope after death, so a child cannot be tested for the abnormality.

"There are no signs or symptoms that predict SIDS or warn families that this problem is there or that SIDS is going to occur," she said.

The report was published online Nov. 24 in the journal Acta Neuropathologica.

"Until we understand more about this abnormality, parents should follow the safe sleep recommendations of the American Academy of Pediatrics," Kinney said.

The recommendation is to place an infant alone in a crib on the back without toys or pillows as bolsters. "The same messages we have always had are still applicable," she said.

SIDS is the leading cause of death of infants younger than 1 year of age in the United States, the researchers said.

Dr. Sayed Naqvi, a pediatric neurologist at Miami Children's Hospital, noted that this brain abnormality has been found in epilepsy, but this is the first time it has been linked to SIDS.

"This needs to be confirmed and more research done to say this is a cause of SIDS," he said.

Marian Willinger, a special assistant for SIDS at U.S. National Institute of Health's Eunice Kennedy Shriver National Institute of Child Health and Human Development, said in a statement, "The new finding adds to a growing body of evidence that brain abnormalities may underlie many cases of SIDS."

"The hope is that research efforts in this area eventually will provide the means to identify vulnerable infants so that we'll be able to reduce their risk for SIDS," she added.