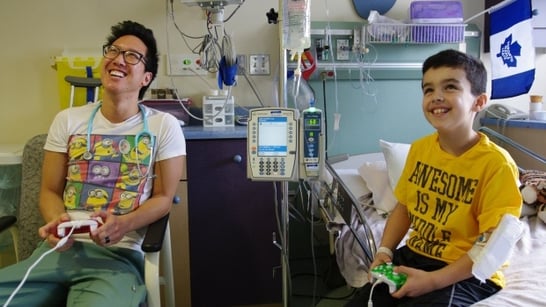 When Nurse Tommy Sing answers a patient's call he has to put his game face on, literally. Sing spends his days pushing different buttons on medical machines as well as game controllers. He may want to keep his actual day job though. His patients seem to always beat him.
Read more below to see how Nurse Sing puts smiles on his patient's faces.

The shrieks come hurtling down the hallway of the Children's Unit at Grand River Hospital, but don't be alarmed. They are punctuated by laughter — a lot of laughter.

"I've always liked to play," he says, "I was never good at them, obviously, but I've always enjoyed playing them."

Sing, who has been working on the Children's Unit for almost six years, has been dubbed the unofficial video game guy for the amount of time he spends playing with patients.

"You know, I'll walk into a patient's room and they'll already have the Xbox or the Nintendo Wii already set up and then we'll start talking video games. Obviously, sometimes, on the floor it's too busy for me to play with them, but if the opportunity presents itself or I finish my shift at 7:00 p.m. I'll stay after work and play a couple of rounds with them."

Although video games often get a bad rap in the health sector, being blamed for everything from poor eating habits to behavioural problems, Sing says they help him build quick rapport with the kids on the unit.

He says the relationships he's been able to form with the patients makes it easy to crawl out of bed in the morning and come to work, even when his shift starts at 7:00 a.m.