This ALS Discovery Just Happened Thanks To The Ice Bucket Challenge 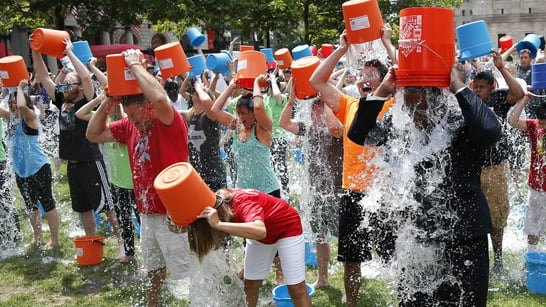 It seems like just yesterday everyone was pouring ice water on their heads to promote awareness for ALS. This silly challenge went viral and even celebrities joined in to raise money for the research foundation. Good news, it is paying off!

ALS, or amyotrophic lateral sclerosis, is a progressive disease that attacks the nerve cells in the brain and spinal cord.

The average life expectancy after diagnosis is two to five years, and currently there is no cure.

Two years after the ALS ice bucket challenge rocked the internet, however, things might be about to change.

A project called MinE at the University of Massachusetts Medical School has just discovered the gene that's responsible for ALS.

Until recently, one of the biggest obstacles to finding a cure for ALS had been not knowing what caused the disease. Now that researchers can pinpoint the gene (which is called NEK1), it will be that much easier to figure out how to reverse and/or treat its effects.

This incredible scientific breakthrough would not have been possible had MinE not received a $1,000,000 grant from the ALS Association/Ice Bucket Challenge.

As such, it's only right that we pay tribute to the many people who sacrificed their dryness and dignity for the greater good.

Over 6,000 people are diagnosed with ALS each year in the United States alone. But this discovery puts us a big step closer finding a cure.

It's mostly thanks to a meme — a truth-or-dare type challenge that many at the time called pointless. This breakthrough, two years after the fact, just goes to show that virality does have power, power that, when harnessed in positive ways, can absolutely be used for the greater good.

Sure these GIFs and videos and images make us laugh, and sure, maybe some people didn't understand why they were participating or they were only doing it because their friends were, but the fact remains: The Ice Bucket Challenge inspired people to get up and actually do something that truly made a difference. And that's pretty incredible.
Related Articles: Ice Bucket Challenge Leads to ALS Breakthrough, Researchers Announce

Larry Stogner, a retiring news anchor for an ABC affiliate in North Carolina, stunned viewers on Friday when he revealed he has ALS.

"For nearly four decades, I have met you right here, usually at 6," the WTVD anchor said during a Jan. 23 broadcast, as a slideshow of his life and career appeared on a screen behind him. "Boy, we've seen a lot of change over those years, but we have to stop meeting this way. I am sure that in recent months, you've noticed a change in my voice; my speech, slower. Many of you were kind enough to email me ideas about what it might be, or just to show concern, and I truly appreciate that. As it turns out, I have ALS, Lou Gehrig's disease."

Stogner added that, last summer, he'd participated in an Ice Bucket Challenge video to help raise awareness and money for the cause. "Little did I know, it was about to change my life," he said. "There is no cure. My career in broadcast journalism is coming to an end."

Married with six children, Stogner joined WTVD in 1976. In addition to conducting one-on-one interviews with Barack Obama, John McCain and other prominent political figures, the Air Force veteran reported live from Raleigh-Durham and beyond — including a 2002 assignment in Afghanistan, according to his ABC11 bio.

In the final minute of the broadcast, Stogner called his WTVD position "the best job in the world," and shared plans to take two weeks of vacation with his wife before returning in early February to share "a few final thoughts and a more personal goodbye."

Flanked by four of his WTVD colleagues, he concluded, "And now more than ever, I say to you, for all those 39 years: Thanks for the company. Have a good night."

Have You Heard about the "Ice Bucket Challenge?"

It may be warm in parts of the country, but some people aren’t drenching themselves in ice or cold water to cool down from elevated temperatures. A new phenomenon has hit the social media circuit – the “Ice Bucket Challenge.”

The challenge involves people getting doused with buckets of ice water on video, posting that video to social media, then nominating others to do the same, all in an effort to raise ALS awareness. Those who refuse to take the challenge are asked to make a donation to the ALS charity of their choice.

Beverly, Mass., resident Pete Frates, started the “Ice Bucket Challenge” with his family on the social sites Facebook and Twitter.  Frates, 29, has lived with ALS since 2012, and he has worked with The ALS Association’s Massachusetts Chapter.  A former Division 1 college athlete with Boston College Baseball, Frates tirelessly spreads awareness of Lou Gehrig’s Disease.

This viral sensation, which has used the hash tag #IceBucketChallenge, has attracted thousands of followers, including Boston Bruins stars Brad Marchand and Torey Krug, who willingly dropped frozen ice on themselves and issued the challenge to others.

“This is a creative way to spread ALS awareness via social media and in communities nationwide,” said Barbara Newhouse, President and CEO of The ALS Association.  “We thank Pete Frates and his family for getting so many people involved in spreading the word about ALS.”

Other examples of the challenge can be viewed on the Team FrateTrain Facebook page.