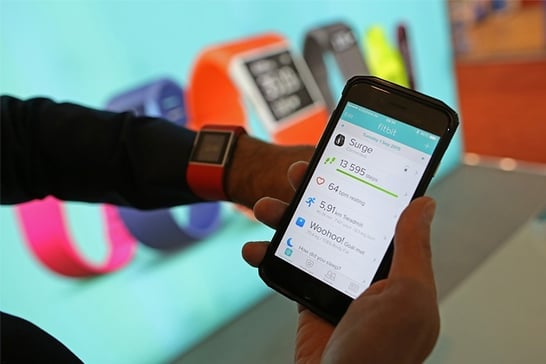 Are you wearing a Fitbit or another devise that tracks your daily steps, sleep and other information? Have you ever wondered who else might have access to your data? I’ve been wearing a Fitbit for close to 2 years and I love it, but I never thought about my privacy regarding the information it tracks and who else might have access to details like my weight, height, age and how physically active I am. Should these devices adhere to HIPAA protections? Do you care? Please share your thoughts with us.

The federal patient privacy law known as HIPAA has not kept pace with wearable fitness trackers, mobile health apps and online patient communities, leaving a gaping hole in regulations that needs to be filled, according to a much-delayed government report released today.

The report, which was supposed to be complete in 2010, does not include specific recommendations for fixing the problem, even though Congress asked the U.S. Department of Health and Human Services to provide them.

HHS’ findings largely mirror those in a ProPublica story from last November. The Health Insurance Portability and Accountability Act, the landmark 1996 patient-privacy law, only covers patient information kept by health providers, insurers and data clearinghouses, as well as their business partners. Falling outside the law’s purview: wearables like Fitbit that measure steps and sleep, at-home paternity tests, social media sites, and online repositories where individuals can store their health records.

“Health privacy and security law experts have a reasonably clear idea of where HIPAA protections end, but the layperson likely does not,” said the report written by HHS’ Office of the National Coordinator for Health Information Technology, in conjunction with other agencies. “Moreover, even entrepreneurs, particularly those outside the health care industry … may not have a clear understanding of where HIPAA oversight begins and ends.”

The report was mandated under a 2009 law that called on HHS to work with the Federal Trade Commission — which targets unfair business practices and identity theft — and to submit recommendations to Congress within a year on how to deal with entities handling health information that fall outside of HIPAA. Asked why the report did not include any recommendations, an official said readers could draw their own conclusions from the findings.

“At the end of the day, it’s a very complicated environment that we find ourselves in,” said Lucia Savage, chief privacy officer at the Office of the National Coordinator for Health Information Technology, which took the lead on the report. “We believe we’re fulfilling our duties. If Congress has concerns about that, I’m sure that we will hear about them.”

In 2013, the Privacy Rights Clearinghouse studied 43 free and paid health and fitness apps. The group found that some did not provide a link to a privacy policy and that many with a policy did not accurately describe how the apps transmitted information. For instance, many apps connected to third-party websites without users’ knowledge and sent data in unencrypted ways that potentially exposed personal information.

Paul Stephens, the group’s director of policy and advocacy, said the issue has grown more urgent in recent years as employers give workers incentives to log their activities on mobile apps as part of wellness programs. “It goes beyond someone voluntarily saying I want this app,” Stephens said. “There are basically going to be financial incentives to use the app.”

Stephens also said many people do not read an app’s privacy policy, leaving them open to having their information used in myriad ways.

The new report pointed to a number of major differences between information covered by HIPAA — your medical records, for instance — and data that’s not. Among them:

In addition, several federal agencies have a role in regulating privacy, new technology and consumer protections. The HHS Office for Civil Rights enforces HIPAA; the FTC acts against deceptive or unfair trade practices; and the Office of the National Coordinator encourages adoption of health information technology.

A 2014 study looked at 600 of the most commonly used health apps and found that fewer than a third had privacy policies. And for those that did, you’d have to have the reading level of a college senior to understand them, the HHS report said. Policies on Apple and Google mobile phone platforms “may be inconsistent, not articulated to individuals, or simply ignored by web developers skirting the rules that operating system developers attempt to impose on them.”

Attempts to fix the problem through voluntary efforts do not appear to be working. In 2015, the Consumer Electronics Association issued a set of “Guiding Principles on the Privacy and Security of Personal Wellness Data.”

“These guidelines can be adopted by companies, but are not required of CEA members,” today’s report said. “As of July 2016, we have been unable to identify any companies that have adopted the guidelines.”

The report offers no suggestions to change that, either.